Chinese-Canadian star Kris Wu, aka Wu Yifan, has been detained on suspicion of rape after an initial investigation, Beijing local police said on Saturday in a short Weibo post.

It said, "in response to the online reports of a person with the surname of Wu x fan repeatedly luring young women for sex and other related accusations, the police has detained Wu x fan (male, 30 years old with Canadian nationality) on suspicion of rape…further investigation is pending."

The police did not release details but said they are still investigating further on the case. 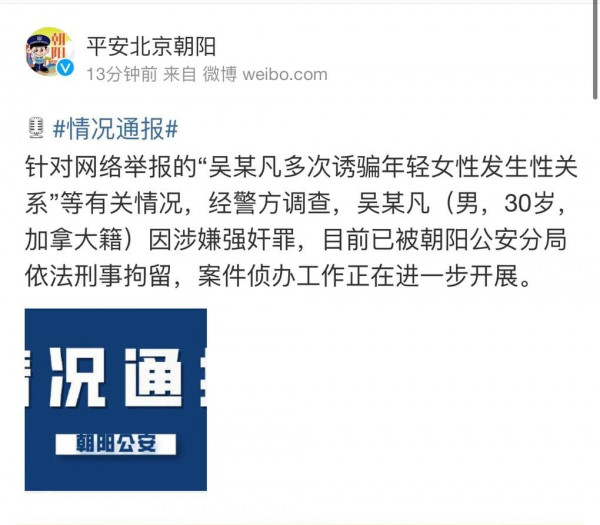 (Photo : Entertainment Times)
Two weeks ago, a 19-year-old Chinese student publicly accused that Wu had raped her when she was 17 after plying her with drinks.
The 30-year-old star denied the accusations, said on Weibo, "I only met this woman once on Dec. 5, 2020 while with a group of friends… I declare I have never done anything like ‘selecting concubines,’ coercing women into sex, drugging people to rape them, or engaging with underage girls! "
"If there really had been this behavior, I would certainly willingly go to jail." Said Wu.

Following the rape accusations, all 15 brands including Louis Vuitton, Porsche, and Bulgari, who worked with Wu, had cut ties with him.

Queen Elizabeth Filing Lawsuit Against Harry, Meghan Markle That Could Force Them To Pay Millions

Angelina Jolie Spoiling Her Kids With Expensive Toys, Gadgets To Keep Them On Her Side